One of my favorite movies as a teenager was The Butterfly Effect. Although it wasn’t a box office hit by any means and probably a poor execution of the idea, the concept that small causes can have large effects and how making one small change can drastically change the future is intriguing to me.

Applying to the Peace Corps at the age of 28 and moving to Namibia to serve at 29, makes me think back to my late-teens and early 20s, you know, back when I was a baby adult? From college to marketing internships to corporate America to college to nutrition internships to Peace Corps, makes me wonder how things could have changed if I made one small change.

What if I would have never signed that letter of intent to play college soccer?

What if I would have chosen a different major?

What if I would have gotten married?

What if I would have stayed at that job that was not fulfilling to me?

When I was 21, I was chosen by my university as the female Student-Athlete Advisory Committee (SAAC) representative for the Lone Star Conference. I was the co-captain of my varsity soccer team, and honestly, I think I was chosen because I had stayed in the town for the summer to work and workout. To be honest, I wasn’t too thrilled about doing more “work” during my last week of summer vacation, but when you tell a college athlete that there will be free food, it doesn’t take much more convincing.

SAAC provides insight on the student-athlete experience and offer input on the rules, regulations and policies that affect student-athletes’ lives on campus. Through this opportunity I was able to meet other student-athletes within my conference. Some of which I have remained good friends to this day.

Our main topic during the 2008-2009 athletic season was sportsmanlike behavior- from the coaches, fans, and athletes.

Over the years, I have had several opportunities to take on some more leadership and advisory roles. But, I never thought these skills would come full circle when I joined the Peace Corps.

For me, this could not have come a better time. The overall morale of a health volunteer in my country is at an all-time low. Recent changes and adjustments within the program, leadership, and clarity of our direction has been a challenge that has been difficult for some of us to shake.

As a PAC representative, I was able to share my concerns as well as the concerns and suggestions from many volunteers without holding anything back. I learned in the same way volunteers may struggle to add value and feel validated, are the same struggles our host organizations deal with on their end. 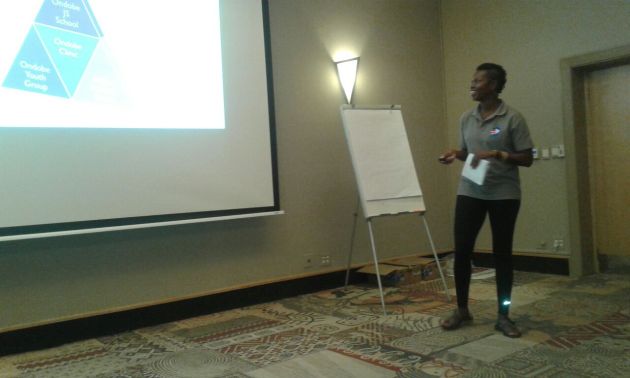 Giving a presentation to a group of over 40 professionals/organizations PCVs work with.

Why am I here?

The Peace Corps is all about sustainability. But, that’s not always tanigble. Capacity building, which is intangible, can be thought of as sustainable. Introducing a person to a new idea that may be more effective and efficient, and the ability for for them to teach others can be sustainable. This is the challenging part. Finding motivated people amd keeping them motivated throughout the entirity of a project is challanging when most people have a “seeing is believing” mindset, and that’s not just in developing countries.

Sometimes I do more  than I should.

Sometimes I want to do what’s best for me.

After having time to sit and think about my role as a PCV, here’s where I feel my duty lies…in a soccer analogy, so be prepared:

My role as a PCV is analogous to a role on a soccer team. I am the goalie. My role is just as important as the striker, midfielder, and defender, but I have a clear view of the entire field and see the entire play unfold. I can see the gaps in defense and opportunities for attack. From my view, know when we need to hold onto the ball and change the pace of play or even change the direction of the attack. Sometimes throughout the game, unforseen events happen in which my team may have to play a person down. If my team is strong, they will be able to play without me. My team can still protect our goal. My team still has a mission and a purpose.

The reality is, in two years, I’ll have to step off the field, and the game will continue on.

So, what if I would have never signed that letter of intent to play college soccer?

So, what if I would have chosen a different major?

So, what if I would have gotten married?

So, what if I would have stayed at that job that was not fulfilling to me?

I can’t tell you the answers to these questions. But, I’m always certain my view wouldn’t be this clear.

Super excited. Headed to my first lunchtime soccer game in ages. Little did I know.

Such a slacker, I know. I did so good scheduling all my post when I was on vacation, but each time I sat down to compose last week, I would get about halfway finished with a post, and just give up. So, needless to say, I have a few posts coming your way this week.

Why is this titled down and out, you ask? Well, one of the main reasons for my lack of blogging last week is because I had a slight dilemma. I found out that I tore my meniscus(again)!

This is not okay. I didn’t think it was that bad, but doctor didn’t agree.

It put me in a bad mood, but finding out added a sense of relief knowing what is finally going on. I didn’t want to post much about it because it took the majority of the week to go through x-rays, MRIs, specialists, and the surgeon. Fortunately, for me, I don’t have to have surgery (yet). I was given a topical gel to apply a couple times a day in hopes to stimulate cell growth. This isn’t my first rodeo, but it came at a “bad” time. There is never really a good time to tear your meniscus, but this came in the midst of me making some really important decisions. More about that later 🙂 Also, before some of you go off on the “running is bad for you tangent.” I tore my meniscus playing soccer, not from running. Which leads me to this, I am formally retiring from soccer. I’m burying my cleats out in the country and pouring Gatorade over their grave for all the knees that didn’t make it this far.

I am 1) getting too old for this 2) can’t afford to put money into something that can be avoided. It is sad to come to this decision, but my health is more important than a hattrick (who am I kidding, hattrick?) in a lunch league to win a t-shirt, just sayin.

Until everything is healed up, I am primarily sticking to biking, swimming, and weightlifting. Well, that’s all I’m really allowed to do right now. Another sad but true story that comes from this, I won’t be able to compete in the triathlons I had planned this Summer and Fall. But, that only gives me more time to get healthy again and train for something else.

So lets just say, I am baaacccckkk. I hopefully will be back better than ever. 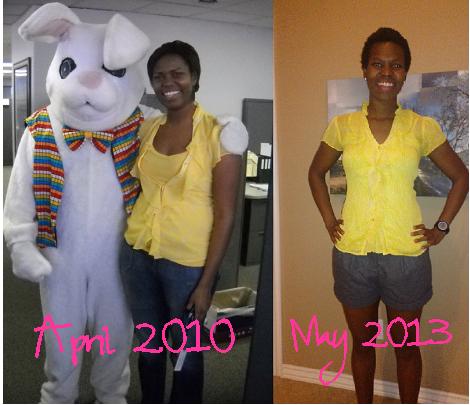 After graduating from college in 2009, I thought I had everything together and that everything was perfect. I mean, that’s when your life begins, right?! With little “real world” responsibilities and more money than I knew what to do with, the brutality of the 9-5 began to take a toll on my sobriety, bank account, and waistline. Many of my evenings and nearly all of my weekends were spent hopping from one happy hour to the next and 2 am Taco Bell binges.

Finally, in January of 2011, I realized SOMETHING, ANYTHING, EVERYTHING, needed to change. This could not be the life planned for me or a story I wanted to tell around a campfire. I was overweight (181 pounds), depressed, and unhappy.

So it began! It wasn’t easy, but I started training for my first 5k. Being a former college soccer player, this should have been a simple task. Hand me a soccer ball and I’ll run all day long. Hand me running shoes and just go ahead and throw in a complementary inhaler. Running, just plain ole running, was not my thing. I knew plenty of runners and I’m friends with lots of them. To me, people like “them” were born to run. Even though deep down inside I wanted to be one of “them.” I just didn’t believe those were the lemons handed to me. Running was scary. Running made your legs hurt and your lungs burn. But, each time I laced up, it got easier. One-mile become two-miles which turned into three-miles. My confidence and self-esteem were lifted. The extra weight and unfavorable habits melted away. Running always makes my bad days better, and my good days great.

Running has helped me restore my sanity. All the negative thoughts and criticism are silenced with each step that I take. It has become spiritual for me. It only takes a small leap of faith to begin. When I began this journey two years ago, I would have never envisioned it leading me here. I’ve made new friends, completed two triathlons, finished my first marathon, ran three half marathons, and participated in several races in between. I’ve discovered the real me. No obstacle is too big, and no mountain is too tall. I’m stronger than I think, I just need to believe it!

Krystal is the gal behind all things Moving Wright Along. She is a food lovin’, budget conscious, Pinterest scrollin’ gal on the path to become a Licensed Registered Dietitian.